This Year in Chemistry: The Biggest and the Most Important Stories of 2015

There were a lot of chemistry news stories in 2015; here’s a selection of the biggest and the most important from the year!

Growing soil bacteria previously thought to be impossible to grow in labs led to the production of a new antibiotic, teixobactin, to which bacteria showed no signs of resistance. The method could produce more potential antibiotics.

In August scientist successfully created the first strain of yeast able to synthesize small amounts of opioids compounds – raising fears of “home-brewed heroin”. In September, a different yeast was engineered to produce cannabinoids.

There’s more to the reaction of alkali metals with water than once thought. The rapid loss of electron to water causes a “coulomb explosion” as the positive ions repel, which sends spikes of metal into the water and triggers the violent reaction.

Analysis of comet 67P returned the first measurements of organic compounds directly from a comet, including four compounds never before detected in cometary material. Molecular oxygen was also found in the comet’s gas cloud.

Tests showed limpet teeth to be the strongest known natural material – up to five times stronger than spider silks. The amount of force they withstand equates to a single piece spaghetti holding up 3000 half-kilograms bags of sugar.

2015 saw the synthesis of a number of new 2D materials. Stanene, an atom-thick form of tin, was observed for the first time in August, and in December it was the turn of borophene, made from boron and showing metallic characteristics.

Scientists “uncooked” an egg white protein to demonstrate the utility of a new technique which allows tangled proteins to be restored to their original form. The research won this year’s Ig Noble chemistry prize.

In lobsters and similar crustaceans, unbinding of the compound astaxanthin from a protein, crustacyanin, causes their color change when cooked. When bound to the protein, astaxanthin is in blue enolate form.

The Effects of Neonicotinoid Compounds on Bees

Neonicotinoid pesticides have been in the news throughout 2015, with concerns over their effects on bees increasing. A study in November found that colonies exposed to the pesticides were worse at pollinating various plants.

3D printing was made up to 100 times faster thanks to a new technique that uses a liquid resin reservoir with an oxygen-permeable polymer window. UV light can shine through this window to cure the resin in the bulk liquid.

Below is the beautiful infographic by Andy Brunning, listing all of the biggest and most important stories of the year 2015. For references kindly visit here. 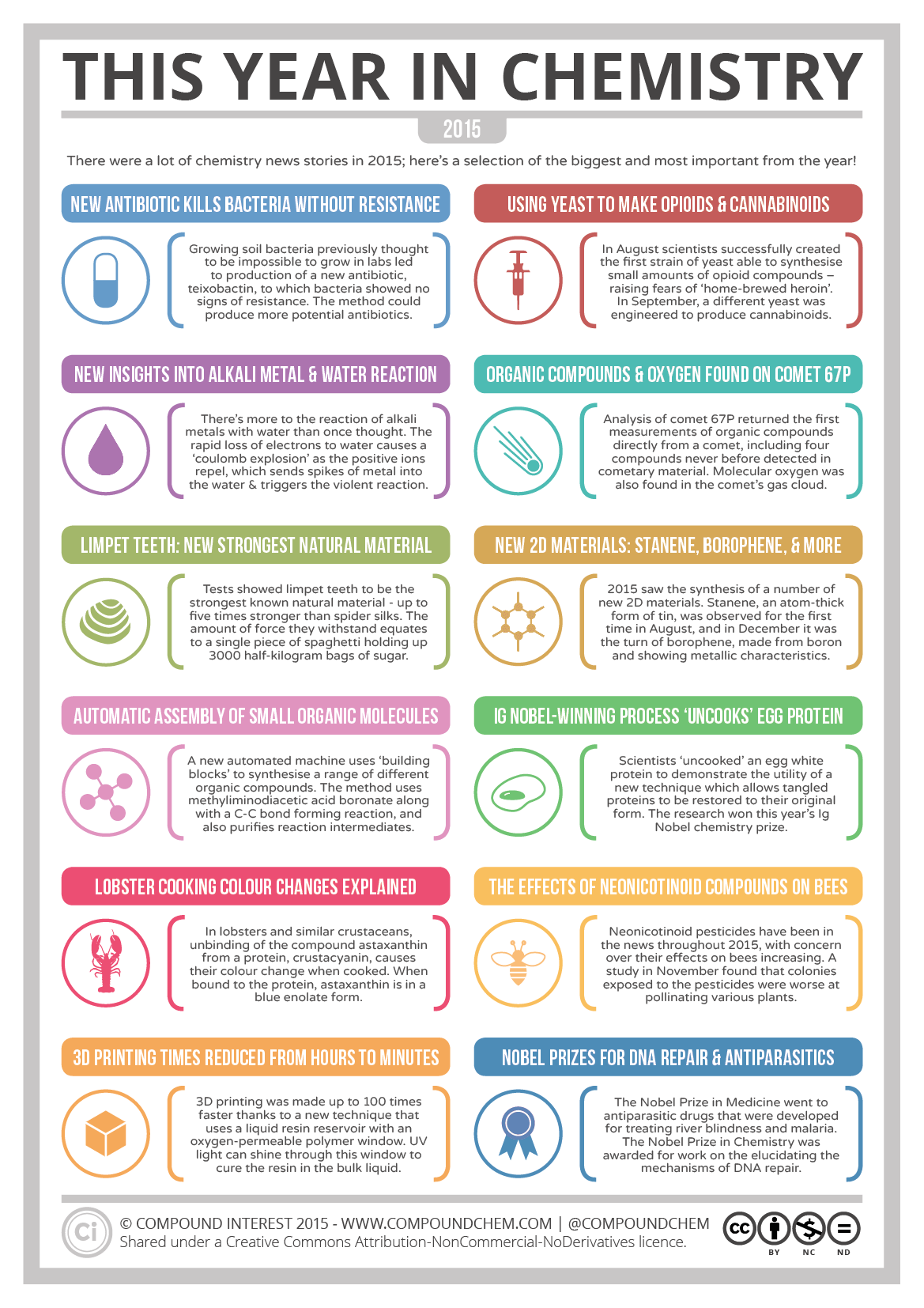