Spectroscopy is the study of interaction between matter and electromagnetic radiation. Spectroscopic techniques are widely used for the structure elucidation of the compounds in organic chemistry.

Mass spectroscopy is the method for determination the molecular mass and formula of the compound and also can give information about structure. It’s a destructive technique that’s why it is called spectrometry other techniques are constructive so called spectroscopy.

Following some points are the principle of MS 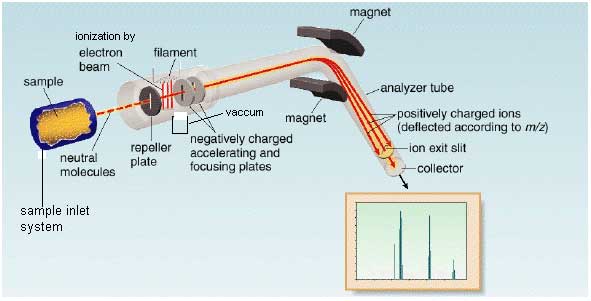 Sample we inject in ionization chamber through sample inlet system. Sample inlet system are in various forms depends upon the nature of sample. The sample may be solid liquid or gas but when sample inject it must be in vapour form.

The molecule is converted into molecular ion (M+•) in the ionization chamber by heating or bombarded with the beam of high energy electron. At the result the loss of electron from sample and formation of positive ion.

This molecular ion is unstable that’s why it decompose and forms fragments of radicals and captions. They have lower molecular weight then molecular ion.

It is electrically heated filament which provides the high energy electron beam. For proper ionization the direction of filament is downward (perpendicular to sample molecule) toward anode.

It has positive electrode potential because it attracts the negative ion.

It absorbs all neutral species.

They have negative electrode potential. They accelerate the positive ion (M+) towards analyzer from ionization chamber

It analyzed the sample. Then separate the positive ion according to the mass/ charge (m/e) ratio. The higher mass will move slowly then lighter mass. So there will be time difference between each ion. Every ion has different radius of curved path. Magnetic field and voltage instead of radius of curve because of radius of instrument is fixed. Every positive charge fragment pass through a curve like path towards analyzer.  Every fragment has specific radius we adjust their radius according the radius of instrument by adjusting two parameter Voltage and Strength of magnetic field.

To detect the fragment it counts the ions. The fragment having same mass will reach to detector at same time.

It records the spectrum of mass/charge ratio vs ion.

The most abounded peak is called base peak. For example CH3 (CH2)6 CH3 alkanes spectrum is 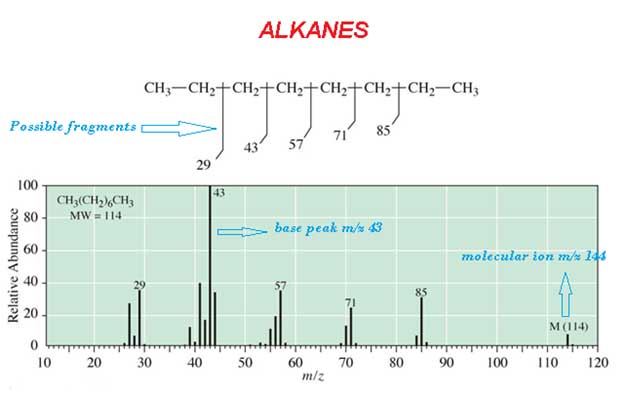 Most elements have major isotopes for example bromine. In mass spectrometry A ratio of molecule  to molecular ion is 1:1 its shows a presence of a single bromine atom in compound. For example 1-bromopropane the mass spectrum is following