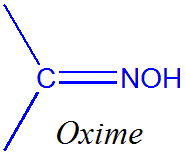 Oximes are the chemical compounds belonging to imines class. They are generally classified into aldoxime and ketoxime. Aldoxime have one alkyl group while ketoxime have two alkyl groups as side chains. Another type of oxime is called as amidoxime where carbon as one nitrogen as oxime and one disubstituted nitrogen atom. 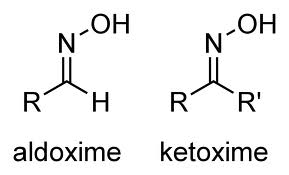 Victor Meyer, a german scientist along with Alois Janny, was the first scientist to synthesize ‘Acetoximsaur’ also known methylglyoxime. Oximes have numerous advantages in organic synthesis which are used for isolation, purification and characterization of aldehydes and ketones.

hydrogen and alkyl group, respectively, and hydroxyl group are on the same side of carbon-nitrogen bond. If they are on the opposite side then the formation is termed as ‘Anti’. This is because of restricted rotation of C=N bond in oxime.Stereochemically, oximes can be ‘Syn’ if in case of aldehyde and ketone,

Oximes are the derivative of carbonyl group but they are less reactive as they are less electrophillic due to less electronegativity of Nitrogen as compare to oxygen in carbonyl. In short, they are low respondents to nucleophillic attack. Generally, oximes are generated by reacting hydroxylamine with aldehyde or ketone [1] but it can also be made by reacting nitrites with compounds containing acidic hydrogen [2].

Most of all of oximes are highly crystalline and the oximation is a very efficient method for characterization and purification of carbonyl compounds. These compounds not only represent a convenient series of derivatives of carbonyl compounds but also used intermediate for the preparation of amides by the Beckmann rearrangement, nitrones, hydroximinoyl chlorides, nitrile oxide and chiral α-sulfinyl oximes. The usual method for the preparation of oximes involves treatment of hydroxyl amine hydrochlorides in a basic aqueous medium with adjustment of pH. Because of improper levels of solvent or reactant being used some oximes are liquid or oil-out and the operating condition of this method are difficult.