How to Use Curved Arrows in Illustrating Reactions

The reaction of hydrogen chloride with water provides a simple example of how to use curved arrow notation. Here we invoke the first of many “A Mechanism for the Reaction” boxes, in which we show every key step in a mechanism using color-coded formulas accompanied by explanatory captions. 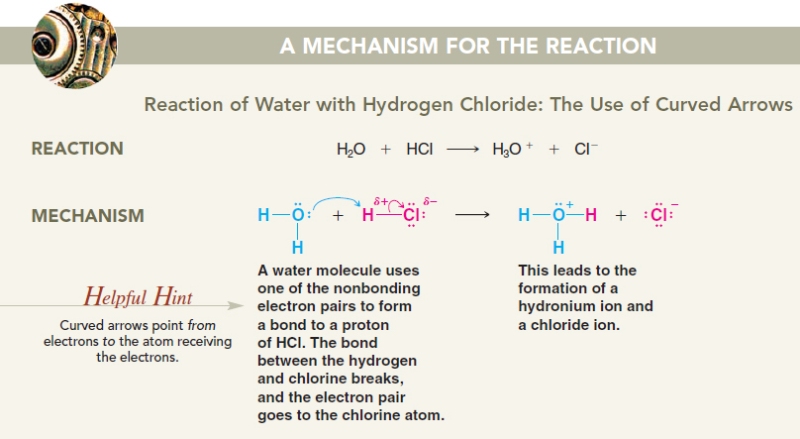 The curved arrow begins with a covalent bond or unshared electron pair (a site of higher electron density) and points toward a site of electron deficiency. We see here that as the water molecule collides with a hydrogen chloride molecule, it uses one of its unshared electron pairs (shown in blue) to form a bond to the proton of HCl. This bond forms because the negatively charged electrons of the oxygen atom are attracted to the positively charged proton. As the bond between the oxygen and the proton forms, the hydrogen–chlorine bond of HCl breaks, and the chlorine of HCl departs with the electron pair that formerly bonded it to the proton. (If this did not happen, the proton would end up forming two covalent bonds, which, of course, a proton cannot do.) We, therefore, use a curved arrow to show the bond cleavage as well. By pointing from the bond to the chlorine, the arrow indicates that the bond breaks and the electron pair leaves with the chloride ion.

The following acid–base reactions give other examples of the use of the curved-arrow notation: 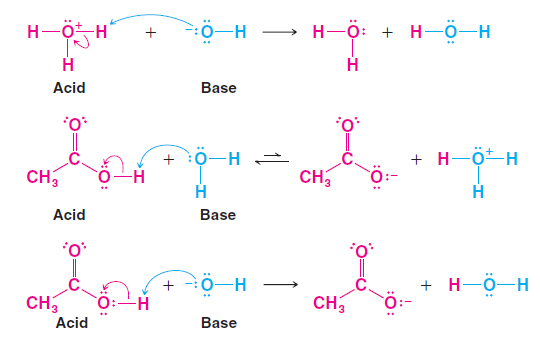 Add curved arrows to the following reactions to indicate the flow of electrons for all of the bond-forming and bond-breaking steps. 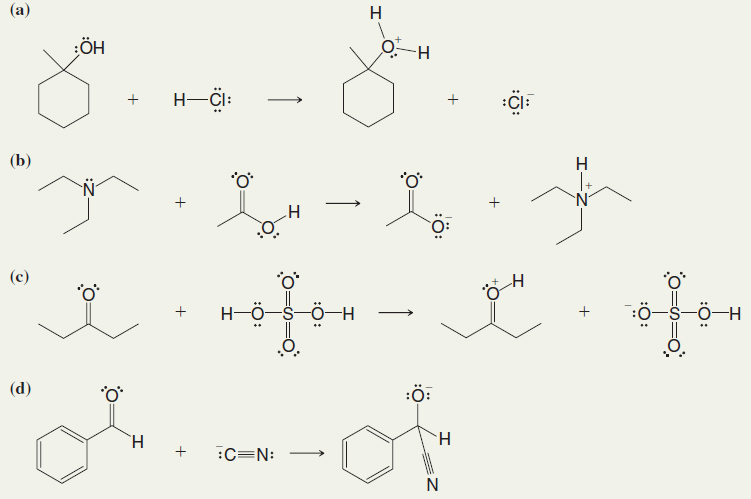 Recall the rules for use of curved arrows presented at the beginning of this post. Curved arrows point from the source of an electron pair to the atom receiving the pair, and always point from a site of higher electron density to a site of lower electron density. We must also not exceed two electrons for a hydrogen atom, or an octet of electrons for any elements in the second row of the periodic table. We must also account for the formal charges on atoms and write equations whose charges are balanced.

The circumstances in (c) are quite similar to (a) and (b). In this case the electrophile is a proton of sulfuric acid.