The Chemistry of Petroleum Refining

Published by Editorial Staff on | 5 Responses 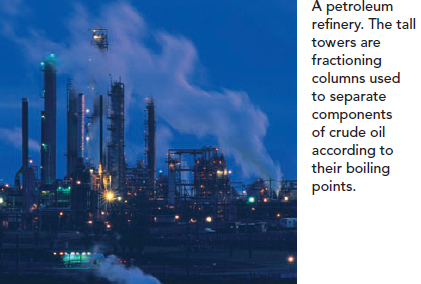 The first step in refining petroleum is distillation; the object here is to separate the petroleum into fractions based on the volatility of its components. Complete separation into fractions containing individual compounds is economically impractical and virtually impossible technically.

More than 500 different compounds are contained in the petroleum distillates boiling below 200°C, and many have almost the same boiling points. Thus the fractions taken contain mixtures of alkanes of similar boiling points (see the table below). Mixtures of alkanes, fortunately, are perfectly suitable for uses as fuels, solvents, and lubricants, the primary uses of petroleum.

The demand for gasoline is much greater than that supplied by the gasoline fraction of petroleum. Important processes in the petroleum industry, therefore, are concerned with converting hydrocarbons from other fractions into gasoline. When a mixture of alkanes from the gas oil fraction (C12 and higher) is heated at very high temperatures (∼500°C) in the presence of a variety of catalysts, the molecules break apart and rearrange to smaller, more highly branched hydrocarbons containing 5–10 carbon atoms. This process is called catalytic cracking. Cracking can also be done in the absence of a catalyst—called thermal cracking—but in this process the products tend to have unbranched chains, and alkanes with unbranched chains have a very low “octane rating.”

The highly branched compound 2,2,4-trimethylpentane (called isooctane in the petroleum industry) burns very smoothly (without knocking) in internal combustion engines and is used as one of the standards by which the octane rating of gasolines is established.